What I Was Thinking 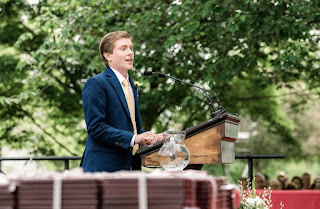 “How did I do?” he asks, moments after the graduation ceremony ends. “I could see you clearly when I was up there, and you had this look on your face, but I couldn’t tell what you were thinking.”
Oh, um…
My kid is up there giving the senior speech and he looks more man than boy. When did that happen?
The guy at the podium was born like fourteen seconds ago, in one of the snowiest winters on record, to two scared parents who’d just moved away from family to an entirely new town and state. Everything was strange but promising and…
Then there was you. Smiley and hungry. Colicky too, every night from 6-9 pm. Which is when your dad would walk you in circles reciting the silliest song that you surely don’t remember:
My name is John Robert and I’m in the house
I’m here to tell you I’m not a little mouse
I’m almost as big as that (syncopated pause) oak tree
So…you better start respecting me!
Uh-huh. Uh-huh. Uh-huh.
After the baby, came the little man. The one who proudly pronounced, “Use your imagination!” as the answer to most questions. The one who built towering sculptures out of his toys instead of playing with them. 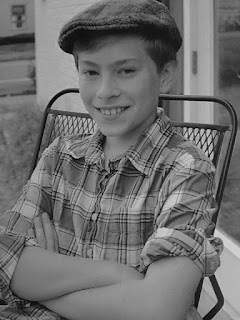 That little man grew into a cautious but persistent tween who preferred an Irish cap to a baseball hat and was prone to telling wildly entertaining stories that we knew to be hyperbole, but we played along anyway. Cause those stories also came with seeds of wit and grace.

The same qualities that are now on full display as the guy at the podium commemorates a rite of passage while his classmates laugh and cheer.

“I was overwhelmed with pride. That was a big deal and you knocked it out of the park. A smile was too simple a reaction for my face,” I tell him. He laughs.

It’s impossible for him to comprehend the mere surface of my love. How could he?

That’s what I was thinking.