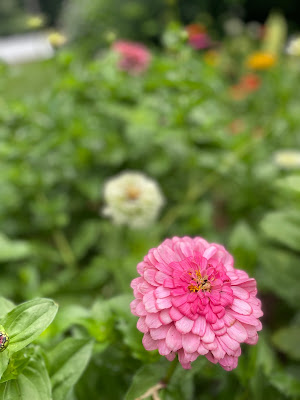 Last summer was a blur…a weepy, sticky haze of emotion. With my oldest just graduating from high school, a global pandemic finally in the rearview (psych!), and my impending reality as a half-empty nester— pride, relief, and fear overlapped like a rubber band ball ready to snap.

Except in the garden.

Last season was the first year, I cut the fluff. All that remained were the essentials.

Tomatoes—for many batches of my ceremonial sauce.

Herbs—because they make everything better.

Out with the squash.

Only dabbled in peppers.

And the addition of a wildflower border in the back!

It was pure joy even if, as usual, by early August the entire garden blended with the wildflowers. Weeds have their own degree of beauty; I now comfortably rationalize.

Then—with the swiftness of a first winter storm, late August moved in. Dorm prep was in full motion and there was finally freedom to fly away on vacation with the fam before we were down a member. Serendipity left me ill-prepared for what came next.

Covid quarantine. We were among the first Delta variant alumni to utter, “Us? No. We’re vaccinated.” Such idyllic times.

Through those strange, strange days of disbelief and dread, it was the zinnias and tomatoes that kept me sane.

A friend with proximity to medical advice, fielded truly delirious questions like: “If I make sauce, and freeze it, is there any chance that when we defrost it months later that we’ll get Covid?” And “Is there any chance of me giving Covid to my neighbors while outside picking flowers?”

I am indebted to her decisive and empathetic emojis.

As abundant offers emerged for staples like soup, beverages, reading material, supplements, and the coveted oximeter (much more effective than panic in reading oxygen levels btw), I’d text: pick some zinnias and tomatoes! Scissors on the garbage can!

Then, I’d add a paranoid quip like: “Don’t worry, I wore gloves when I took them out there!”

I find humor to be a highly effective delusion-masking tool.

It was an unusual period. Add in that we sent the boys away to their grandparents' cottage because as the kind CDC woman put it, “If they haven’t gotten it by now, they’re safer out of the house.”  Just what every parent mourning her child about to leave for college wants to hear.

I made batches and batches of sauce.

Flooded the house with flowers.

Fielded fun pictures from friends enjoying their zinnias and tomatoes.

What a colorful, juicy contradiction last summer was. Happy running alongside fear, with gratitude the ever-present assist.

This year, summer’s middle is fast approaching, and I don’t yet have a descriptive. It’s too early to label this full, yet quiet, (where am I?) time.

Except in the garden. In there, the flowers, tomatoes, and herbs are popping alongside the mostly manageable weeds. Harbingers of a beautiful August.

Posted by Holly Howley at 11:16 AM No comments: