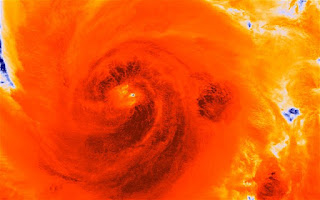 Sandy is on her way. Exactly when she will arrive is a bit vague. But she is coming and the world, at least my world, is preparing for her arrival.

At the hardware store there are batteries, flashlights, wood, and candles stacked high. The generators and propane are gone.

Oddly enough most people, including me, are buying things completely unrelated to the impending storm. The guy to my left is buying grass seed. The woman to my right a shower curtain. I am scouring the isles for a tea kettle. Ours broke last week and I’ve neglected to pick one up until now. I find tea comforting on rainy days, and it appears we are in for a steady stream.

I’ve already bought batteries (still I tuck more in my basket.) The non-perishables were purchased yesterday. Cans of soup, bags of chips, crackers, raisins, and peanut butter line my cupboards. Water and wine are in reserve. My husband cleaned the gutters, the neighbor trimmed the tree.

“This could be bad, really bad,” our Governor warns. It’s like waiting for surgery or the phone to ring when a loved one is ill. There is an air of dread, inevitability.

Random items secured, I walk next door to CVS, the real reason I am killing time in the holy name of preparation. I’m filling my son’s inhaler in case we are stuck in our basement for weeks and he has an asthma attack. If you think that sounds a tad dramatic, you’re not alone.

When I suggested I make up beds in the basement, in case we needed to live there for a while, my husband asked, “And why will we be living in the basement?”

“Because a tree will have fallen on the house and upstairs will be unsafe, not to mention covered in leaves.”

I was being funny, kind of. I am a firm believer in “Worst Case Scenario” planning. If I’m prepared for the worst, I’m just fine when something smaller, less sinister comes my way.

As I walk through the store, closing in on the inhaler, I pass a massive display of Halloween candy. Normally by now I’d have purchased ten bags of little nuggets and chocolatey gems. But last year we were piled high with sweet temptation for months after Halloween was canceled due to a snowstorm. Not this year, I tell myself. Should we make it out of the basement by Wednesday, there will still be candy on the shelves.

On second thought it can’t hurt to get a bag of Butterfingers.

I visually scan the remaining isles. Toothpaste: check. Toilet paper: got it. A woman carrying an armload of dish soap passes. Did I miss something? I don’t remember reading anything about stocking up on dish soap. Instead I grab a deck of cards. Never hurts to have an extra deck of cards.

I finally reach the pharmacy and take my rightful place in line. I am surrounded by familiar strangers, people I don’t know but kind of sort of recognize from running the errands of life.

“Are you ready?” a man asks, just as the pharmacist hands me the inhaler.

We exchange nods and knowing smiles.

And finally I head home, prepared as I’m ever going to be. To drink tea, eat Butterfingers and play cards...in the basement. 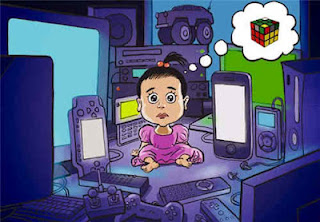 This morning I was out for a jog on a long country road, a picturesque route with barns and farms along the Connecticut River. Smack in the middle of a straightaway I saw a woman speed walking in front of me.  As I approached her, I said “on your right.” Two seconds later, I passed, on the right and the woman jumped out of her skin. “You scared me,” she mouthed barely cracking a smile. It was then I noticed she had ear buds in.

How is someone supposed to warn someone who’s wearing ear buds anyway?

An hour later I’m at a four way stop on Main Street in the town where I live. I watch a mother, head tilted slightly, pushing a toddler in her stroller with a second child walking by her side. The scene seems normal enough until I realize the reason her head is cocked to one side is she’s talking on the phone.

Two errands later on the same busy street, I sit idling, this time at a four way stop light. I look to my left to see a man on a motorcycle helmet-less, but that’s not the worst part, he’s texting. That’s right, texting while seconds from having to hit the gas and plunge into an intersection with cars and trucks and buses and me.

What is wrong with people?

I’m not saying I’ve never done it. Check texts at a stop light or take a phone call at an inopportune time...but I have this feeling that what used to be an exception reserved for a family member giving birth or “did we get the house?” is now simply status quo.

Every e-mail, text, tweet, every last thought, message, inclination is tended to moment by moment day after day. And nothing, not driving or walking or crossing the street will get in the way.

I find it exhausting! Partly because I don’t understand it and partly because if every one else is engaged...well than maybe I should be too.

What is the threshold for information overload?

Ten years from now will families still talk at dinner or will everyone be texting each other in silence? Will workplace meetings be replaced by looking into a screen...oops, that one has already happened.

Lately I find myself feeling like the parents who once shuttered with disapproving shock watching Elvis gyrate his hips at screaming teenage girls.

“What is this world coming to?” they wondered.

“What is this world coming to?” I wonder now too.

Several hours later, with errands complete and the kids successfully tucked away with friends, my husband and I hop the 5:15 Metro North train headed for NYC for a Friday evening wedding. Within ten minutes of leaving New Haven, Rob is fast asleep.

While he sleeps I make my way visually around the train. People-watching is one of my favorite past-times. I’ve been known to listen in on a conversation or two.

But to my displeasure, on this night, the dozen people in my immediate space aren’t having any conversations. They hold empty stares, transfixed by their phones.

People watching is supposed to be a silent incognito act. My fellow passengers are clearly not playing along. I have the urge to yell:

Where are you going? What is your story? Do you even have a story? Or are you waiting for your phone to tell you what time it is, who likes you and what tomorrow will bring?

Instead I take out my own smarter than me phone. And engage myself in a game of Words with Friends. Using words I barely know with friends I cannot see.
Posted by Holly Howley at 8:46 AM 2 comments: