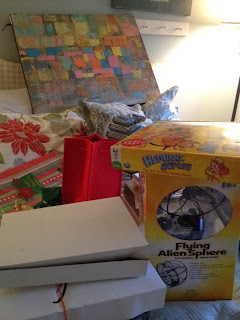 'Tis the Season (To Re-Learn a Few Things)

Stories from Christmas Past (not much has changed).

This year was going to be different. Most of my shopping was done in November, I was wrapping by day one of the advent calendar, and a summer snapshot had produced the perfect picture for the ceremonial card.

Each year our family—me, my husband and our boys—travel around the holidays. The timing and order of visits varies, but we are always on the road. By now, I am used to the shopping and wrapping and laundry required for the journey, still it comes down to a lot of last minute. But not this year.

This year I was ready, prepared. Four days before the car would be packed and ready to roll, I even decided to take both boys, with their festering colds, to the pediatrician for a precautionary visit. Just to be sure.

“Everything looks good,” she’d said, checking all relevant ears and noses. “Just watch the congestion, you never can be sure of where a cold will settle.”

Five days later, on Christmas Eve morning, my youngest woke unable to open his eyes. I shouldn’t have been surprised, but I was. What more could I have done to secure a stress-free holiday? Three hundred miles from home, we found our way to a friend of a friend’s doctor who this time diagnosed double ear infections and conjunctivitis. 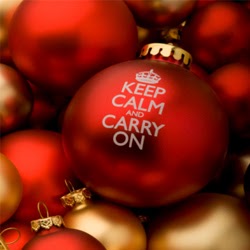 As I stood in line at the local pharmacy, trying to remind myself that in thirty years I would look back on this time with longing, I caught my reflection in a strangely placed mirror. I looked tired and unremarkable. Not at all what I had imagined when I bought the latest product for my new “piecey” haircut (as my stylist called it) or as I labored to pack five complete outfits for long lingering cups of coffee while catching up with relatives.

Later that day my brother and sister and their spouses began to arrive. As we transported packages, caught up on the day and slowly made our way to the living room—glass of sparkly bubbles in hand—I started to remember what I seem to have to re-learn every year.

Christmas can’t be captured in a card or even a superbly thoughtful gift. Christmas arrives in moments. Snuggling with the littlest family members, re-telling the stories of loved ones long gone, singing carols around the piano, watching my mom make the same oyster stew, that no one really likes, because that’s what her mom made at Christmastime. Basking in the warmth of connection.

And, if I’m lucky, each year getting a little closer to acceptance. Because the kids will probably get sick and my hair will most likely fall flat. And despite my grand desire to orchestrate the endless details, as though somehow this year will be different, the simple fact is: the season is bigger than all the efforts. That’s what makes it Christmas.