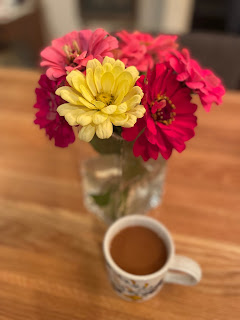 The day my youngest son began kindergarten, I invited a group of friends—my coveted playgroup—over for coffee. I had the whole morning timed out perfectly.

Will would get on the bus, I’d hit brew on the coffee maker, lay out the beautiful new mugs purchased just for this occasion, add muffins, and voila! The makings of a milestone morning surrounded by the people who’d helped me through sleepless nights, potty training, and deciding that the scootch crawl was developmentally okay.

There was only one problem. After Will got on the bus, I promptly went to our bedroom, with my husband following closely behind, and fell apart. I still recall the look on his face—the visible confusion about what I was attempting to process.

“I thought you were having the girls over for coffee?” he said.

Omg. Did he really think I literally meant “now what?” as in like this exact moment? How could he not feel the enormity? We were at the precipice of all that had come before and all that would come next. Both of our sons were out in the world, spending as much of their waking day with other people as they did with us—with me.

And to be clear I was the one emotionally dangling, not Will. He’d gotten on the bus willingly, with his too-big backpack of favorite books and snacks. And he’d be home in three short hours. Kindergarten was still a half-day proposition back then.

I tried again, to have my angst validated as my first guests arrived. “I can’t believe he’s in kindergarten. Now what?”

A parent who’d already been through the paces said simply, “That takes a while. Today just drink coffee.”

Just drink coffee? Interesting perspective—and not that different than Rob’s, just a little less annoying because it was coming from a girlfriend.

On day one when I gazed at my startled, hairy, handsome son—kindergarten might as well have been the moon. 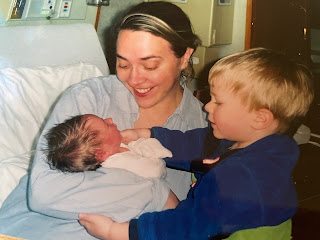 And on that same day, at thirty-two, the thought of turning fifty was…well…definitely not a thought. I had more important things to do than age. But it happened anyway.

Are you metaphorically with me here?

If my own personal movie trailer could have prepped me, on that day, for the next eighteen years, I’d have thought…that’s a lot and pretty great. I also would have been prematurely exhausted and confused.

I know how lucky I am. To be here, getting older, contemplating twilights. I now appreciate that what comes next won’t magically sort itself out on a random day commemorating the number of times I’ve rotated around the sun.

And I also now fully embrace that it’s human nature—or at least my nature—to want milestone days to feel monumental. Which is why I’ve stocked up on coffee. And wine.