The Middle (In The Garden) 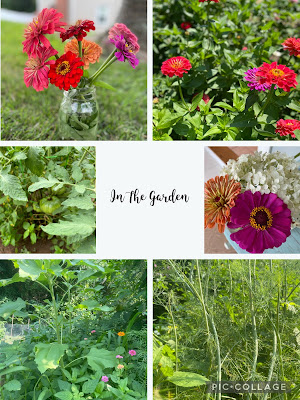 It’s a mystical, murky mess in the middle.

July into August, in the garden, is where hard work collides with luck, producing a snapshot of reality. Where the distance between “Is this really worth it?” and “Those are amazing!” is a short, predictable stroll.

Quick crop update: the peppers are once again underperforming. The cauliflower started out with promise but now is a bug infested mess. The basil has taken over. There is so much that I’ve incorporated it into most meals. (Turns out basil is DELICIOUS in scrambled eggs.)

The over-achieving crop of the season? By far, the flowers.

Last year toward the end of summer, I lamented to a friend that the herbs and tomatoes were the season’s lone stars. She suggested I do a combo next year. A mixture of flowers and vegetables. The idea intrigued me.

I am a flower enthusiast. But the planning of flower beds—the quest for the optimal balance of annual and perennial pop—just doesn’t tug at me. Cut flowers, however, are always on my grocery list.

Mid-winter a book arrived in my mailbox titled In Bloom by Clare Nolan. I scanned each picture and read some of the content, but I am not a research driven DYI’er. I’m more of a throw some seeds in the dirt and hope for the best kind of gal. Which is exactly what I did in late May.

It was impossible in the early days to discern the fledgling buds from the weeds. I did my best, then made a chicken wire fence around their perimeter and let them be. Now the wild back garden border complete with cosmos and sunflowers is a wonder to behold and best of all: carefree.

I also planted zinnia plants (not quite the same gamble as seeds). Just a few on the edge of the garden bordering my neighbor, near the peppers. I thought maybe the zinnias would give the slackers a pep talk. No such luck, the peppers are barely peppering. But the zinnias are visual rocket ships to joyland. Endless fireworks all day.

Other than the flowers, only a few cucumbers and wax beans have been harvested. Unless you count the dill, parsley, and basil that could fuel a small country.

There is a section in In Bloom titled “Enjoying the Fruits of Your Labor.” That’s the stage that comes next.

But for now, we are solidly in the middle. Where misshapen rows of green tomatoes meet jumbo dill and thriving weeds in a glorious, tangled display. All under the watchful eye of the shooting-star zinnias and cosmos.