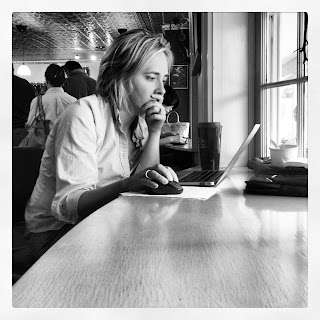 It takes a lot of mental, physical, and emotional energy to write—anything. A sentence, a book, a poem, a letter.

We writers mostly write alone. But we can’t do it alone. We need the world around us, to present itself. Then it’s up to us to…

I used to believe the best place to start was with the dripping moments—the giving birth highs and saying goodbye lows. It’s not. Those memories meld to the DNA, forever changing our make-up. Finding words worthy of those soul-poppers takes a lot of practice.

While I practiced, I led a writing workshop in the town where I live for many years. The class was for anyone and everyone who wanted to…Just Write.

What I learned? Writing is about seeing and being seen.

Most folks showed up with more than a little hesitation about being seen. Drawing attention to an everyday act or emotion was often viewed as boastful, akin to dipping your toe into a self-grandiosity pond where you might quickly drown or start believing that you were special. Or worse, find out that you weren’t.

I could immediately relate because my generation was taught that there was a pecking order to who was seen. That you earned the right, through credentials or pedigree to be a this or a that. Being seen was an honor reserved for worthy types or outliers who’d achieved.

It’s human nature to compare ourselves to others then assign worth based on a set of data points we value. Problem is, when we sort ourselves and others this way, we negate what makes for good writing…the unexpected, the raw, the scraps that haven’t seen light yet.

For the first class, I started by talking about my background—a credo to my worthiness—proof that I should be standing in the front of the classroom. It was tedious and made me feel like a poser, so I stopped. By the second session, I formed a circle with the classroom chairs so there was no front of class and began with what I actually believed:

“What makes us all writers is that we write. For the next several weeks, commit to stringing words together to understand yourself and the world around you a little better. That’s it. The words don’t need to be grammatically perfect or profound, they just need to be written, by you.”

I usually started with a prompt that had been given to me, at a writing workshop, I’d attended. “Write about your dinner table growing up.”

Then, off we’d go, in search of truth or fiction or both.

All of this came rushing back recently while watching the immensely moving Netflix series Maid, based on the book by Stephanie Land. After journeying with this character through an emotional story about abuse, massive disappointment and personal growth, there was a very simple scene toward the end where she shares her love of writing with a group of women.

The character, Alex, begins by saying, “No one can take writing away from you. Or tell you that your words are wrong. Because they’re not. Your words are f*in right cause they’re yours.” She then invites the woman to write with her. “I brought some writing prompts that I got from a real professor off the internet that is actually qualified to teach things.”

It was a sideswipe of a plot point, but wow did it resonate with me. Alex struggling to embrace her value while encouraging other women with shared experiences permission to do the same.

It’s a simple but powerful truth. We all crave permission.

Sometimes we give the permission to ourselves and sometimes we share it with others. Sometimes we do both at the same time.

And hopefully over time we see that life prompts are everywhere, willing us to…

Kick the ball before we know how

Wrestle with words—until they’re unapologetically ours.