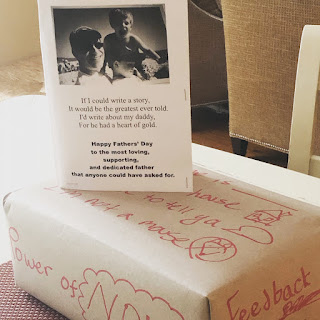 A week before Father’s Day I left a survey on Rob’s favorite TV-watching chair.

“Just a few questions to help us to better understand how you’d like to spend Father’s Day this year.”

He didn’t exactly roll his eyes. It was more of a “I am so being set up” look. He scratched a few responses and, in less than five minutes, I had a clear picture of what the ideal Father’s Day looked like, to him.

Coffee on the deck with me in the morning;
Mass;
Driving range;
and, a “fish dinner” with homemade brownies at home.

In the gift section, he circled HOMEMADE AND SENTIMENTAL, an option I’d included as a joke. After all, he has two teenage boys and a wife who doesn’t bake or craft. 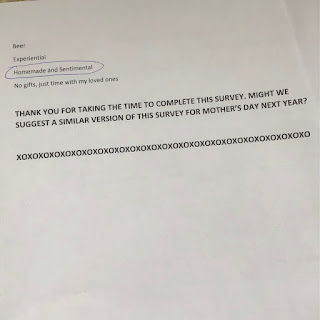 I handed the survey to the boys later that night and said, “I’ll sip the coffee and make the fish dinner, the rest is up to you.”

We did everything on the list. We even watched Meet The Press (no conspiracy involving European football on Father’s Day!)

I shopped for a smorgasbord of fish and happily cooked it while the guys went to the driving range. John baked the brownies and both boys made a homemade card to accompany the gift Rob had bought himself (smart guy). The boys wrapped the gift in cardboard paper and covered it with their favorite corny Dad mantras, including “Feedback is a gift,” “Power of Now,” and “Happy fall, y’all!” (He says it ALL year.)

Here’s what this little exercise taught me. As much as we think we know what the people we love are wanting and feeling…how could we? It’s kinder and less complicated to ask.

Turns out, “Feedback is a gift,” and there is “Power in Now.” (Even on pesky Hallmark holidays.)

Wishing you a warm, wonderful summer.
See you in the fall y’all!