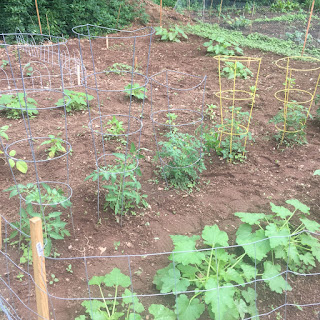 The summer started strong, in the garden. One month in I was declaring weedless success and then…


I could give you all sorts of reasons. Not enough time. Life. Swim meets. Performances. Tennis matches. Work. Life (did I mention life?). But all of those things while true, are, well…excuses.

In short: it’s been another weedy summer.

In the ambitious days, before the weeds, I put up a fence, to keep the bunnies out. We have lots of bunnies, always have, but this year they either multiplied or attended an assertiveness seminar.

Growing up I spent many an hour with the story of Peter Rabbit. My mom is a Beatrix Potter enthusiast; we had beaucoup volumes on display. Ones we could touch, ones that were *vintage* for show only. Peter was a big deal in our house. (Mom still has Peter Rabbit china!) 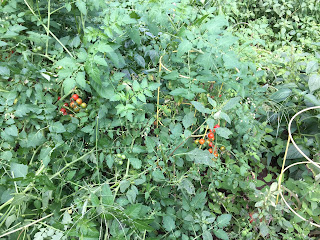 After this summer, I view this supposed-to-be idyllic tale of a bunny in search of food through an entirely different lens. I now strongly identify with the antagonist, Mr. McGregor. What right did Peter have to graze on his hard work? None!

There is another side to every story…

After several failed attempts to grow peppers, this summer I have peppers a plenty! Hot peppers, sweet peppers, even yellow peppers. (Can you feel my pepper pride?) 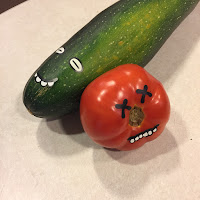 And my zucchini, well, they’re ginormous. Which probably means that I didn’t pick them soon enough but it also means that there were so many it was hard to keep up. After a few weeks of grilled zucchini, zucchini fries, marinated tomato zucchini, and lots and lots of zoodles, I started throwing zucchini at anyone who looked my way. My squash were the butt of an office joke or two and at the heart of many a meal.

The tomatoes this year are also quite astounding. Multi-colored heirloom varieties and sweet grapes, all drenched in that ridiculously awesome scent, nature’s most perfect perfume.

Not all the crops were successful. The pumpkins were a bust and the bunny-nibbled sweet potatoes never rebounded. 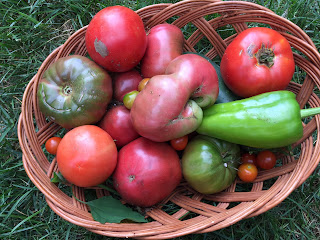 But the simple truth is, this season, the vegetables flourished right alongside the weeds. The whole thing is really spectacularly strange and beautiful to behold.

I’m fully aware that it’s a magical synergy of sun and rain and soil that make the vegetables grow—not me—but I’ll take a little credit. Because I claim those massive weeds too.

Some summers simmer slowly like lazy youth filled days, others are a thrill seeking frenzy. Then there are summers, like this one, with too much sun and too much rain, a jumbled mishmash that leaves me longing.

But all of these summers have one thing in common. I'll want them back someday.


'Cause there’s never enough summer, in the garden.