It’s summer. The pause in the year when fireflies dance at the end of sunscreen drenched days. Needed space between what is and what will be. Which is why when I found the essay below from many summers ago, it felt worth remembering. 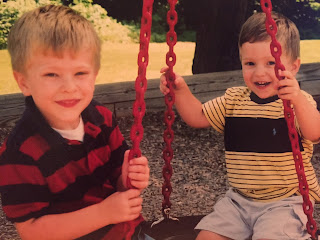 Then: I was trapped by nap times and feeding schedules and too much laundry, some days more happily than others. Our daily outings centered around coffee and air conditioning. I tried to look like I knew what I was doing in hopes that someday I would. But mostly I prayed that the beings in my care would turn into happy, kind humans. 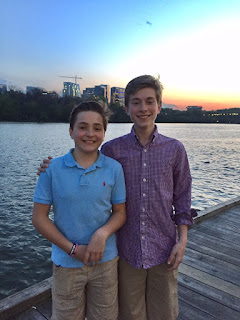 Now: Feeding has no schedule or budget (WOW do teenage boys eat a lot!) and there is still way too much laundry. I wonder if they will ever go to bed and then if they will ever get up to join the day, already in progress. I have officially given up on looking like I know what I’m doing...I don’t. And, that’s okay. Because mostly they, those toddlers once in my constant care, are kind and happy human beings who’ve mastered the art of laughing right alongside their caffeine coaxed mother.

Summer, Circa 2006
It is an air thick as soup, “I am never again buying a house without central AC,” kind of day. And so, with the clock reading nine thirty and the thermostat ninety-two, I pack my little guys up and begin the trek to our local, highly air-conditioned, big box bookstore. The one with the great coffee and train table. The same train table that we have at home, but for whatever reason is so much more enticing when surrounded by volumes of Dr. Seuss and sales people who smile forcibly as toddlers dismantle strategically placed toys.


Iced coffee in hand, we make our way to the back of the store. I quickly span the displays looking for potential reading material. I have exactly three minutes on the walk from the front door to the consumer-in-training section to find the day’s literary gem.

On this morning we reach the children’s section with relative ease. There are less people than usual. My three year old leaps out of the double stroller at the sight of the other kids while my fifteen month old recites “twain, twain” until I release him from the grips of the seat and he runs to his brother’s side.

There is a pleasant looking woman, a grandmotherly figure, with a boy and girl about the age of my boys. Immediately all four children begin grabbing trains in a claiming frenzy. The grandmother and I smile politely at each other and gently coach our youngsters into sharing. This is a mostly futile exercise, but we fain its importance nonetheless.

After a couple of minutes, another mom and her son join our newly banded group. The son confidently begins playing and chattering with the kids. I watch my little one look on holding a lone broken train in his hand. I imagine that he is contemplating if he yet possesses enough brut force to obtain an upgrade from one of the other children’s piles. He smiles as if someone has just told a really funny joke and then mimics the “choo choo” sound my oldest is making.

Everyone is plugging along until:

For a moment no one says anything. The kids are oblivious. I open the book I have been holding. The grandmother looks away. The young mom stands silent until “Sh**!” happens again.  Still trying not to make a scene, she leans down very close to the boy’s face and says in a half whisper “That’s not a nice word.”

The moment could have, should have, ended there. But it didn’t.

“He must have heard that word somewhere before,” the formerly pleasant grandmother sputters.

Again, silence. The young woman smiles, sort of, clearly not sure what to say. I mean really what is the correct response? “You’re right. My husband swears like a truck driver. Come to think of it so do I!”

I search frantically for a witty, ‘this is no big deal’ comeback. I don’t find the words.  Instead the women finds her son’s hand and they are both gone within seconds.

It’s back to me and the grandmother. 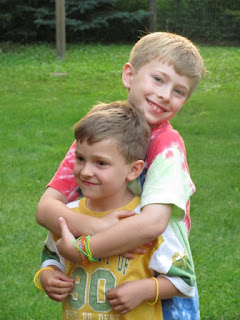 I feel like giving her a piece of my mind. Unleashing all my frustrations, pertinent and otherwise. Instead I bury my head into my book, taking special care not to acknowledge her out of some weird solidarity with the mom who has just left.

I silently wonder if the woman sitting across the train table is an all around crummy human being or if she’s just having a bad day. And if the mom who has just left will roll her eyes at the experience or stew all the way home.

That’s the thing about parenting. The responsibility can feel overwhelming.  Shaping a budding little life is a marathon-like endeavor.  And it would be nice if the job came with a few accolades—a big booming loud speaker announcing your name as you cross a milestone, or a little one liner in the paper noting the care and speed with which you glide through each day.  Instead, we torment ourselves and each other, not really sure how we’re doing.

That night as I rehash the bookstore scene with my husband, I barely make it through the first expletive before we are both laughing hysterically. Only then do I realize what I should have done earlier in the day.

Kids are just plain funny.  And, sometimes all we really need to do is laugh.