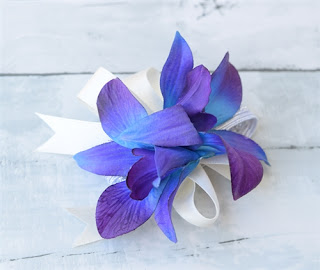 Made with real butter
I’d run

There they’d always be

Carefully, finally…
I’d choose
The right one
For me.

Early on, I’d told him the story.

How my mountain of a Grandfather would stock the refrigerator with single stem flowers and pearly pins in colorful boxes on Easter morning.

The cast of characters would change. But each year they—the corsages—were the same. Well not the same exactly. But there. Like spring’s calling card, waiting.

And so on cue I’d run to assess the selection before ceremoniously informing my grandfather of my decision. He’d proclaim the one I’d chosen: taken. My aunt would invariably pretend that too was her favorite before relenting. Everyone knew. As the oldest granddaughter, first pick was mine.

All those years ago, it was an already out-of-date tradition, one that meant the world to me. Though I don’t think I could have articulated why.

This year on Easter morning I entered my kitchen with mock excitement intended to rouse cynical teens.

“Did the bunny come?” I called out before my senses flooded. A small pink box with a single orchid sitting on the kitchen table.

“For me?” I asked, with familiar anticipation.

The one who chose me smiled.

It looked strange, out of place, lopsidedly pinned on my bright sweater. The corsage actually fell off half way through mass. (How the heck did I get that pin to stay on my dress when I was nine?) But, it felt amazing.