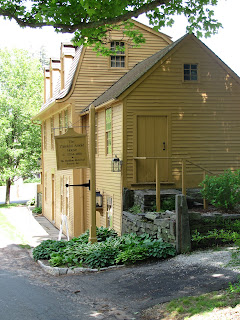 Thankful
After some time passed, I decided it was time to get back in the car and find the next destination.  I was thinking maybe ice cream.  Determined to cover new ground, I turned right out of the park entrance, away from the way we’d come.
We passed one serene sight after another. It was as if we were in the opening scene of a movie about a tucked away New England town.  As each intersection came upon us the car drove as if on auto-pilot. Except for an occasional glance at the clock, I was oblivious and loving it. I even took special care not to turn on the news, as I always do, while driving. Silence seemed the appropriate score.
“Of course,” I thought as a large white historic looking gazebo appeared in the middle of a fork in the road.  This intersection was a little trickier than recent others. I could feel us getting deeper and deeper into a residential section of town.
And then I saw it. A sign that read “Thankful Arnold House Museum.”  I followed the sign’s cues, compelled by the curious nature of the name.
As we made our way through one country twist after another, I began to realize that somewhere I’d gone wrong. Maybe my mind had concocted the marker. A possible mirage of sorts given my “adventurous” state of mind.
As I turned the car around trying to figure which way next, there it was. A long colonial mustard colored house that looked like it once was in the heart of something. A square sign with black writing blew in the breeze, noting the storied significance of the structure. I pulled into the little driveway and parked next to a perfectly tended garden with a wooden trellis.  We walked through the garden path to the back door and opened it slowly.
The room was dark but inviting.  Small displays were set up on tables.  “Hello,” the greeter said rising from a basement staircase, seeming surprised to have a visitor.
“Hi, we saw your sign and decided to come in,” I said, almost defensively.
“What kind of tour would you like, the quick one or the full?”  Our host asked.  At first I thought the question was kind of funny, since the Museum appeared quite small. But then she gave Will a smile and handed him a basket of olden day toys. It was then I realized she probably didn’t have a lot of five year old patrons.
Still, he was curious and she was very gracious as we made our way through the rooms. We learned of Thankful Arnold, a widow with twelve children who took in boarders after her husband died to pay off his debts. The house was turned into a Museum in 1965, by descendants of Thankful as a tribute to her everyday triumphs and to the historic nature of the house.
The rooms were set up as they would have been in 1825. Will was particularly memorized by where the boys in the family slept—in the attic on straw. I could see his level of appreciation for his own accommodations rise tenfold as he leaned on the bed in disbelief.
As we finished our tour, I casually asked, “The name Thankful, was that a nickname?”
“No, in those days girls were named after traits their parents hoped they would possess.” She pointed to a list of other common names of the day sitting on a desk to my left.  Submit, Obedience, Relief, Mindwell, Consider, Freelove, and Silence were all on the list.
I shuddered at the thought of having a single desired trait thrust upon a person for their whole life in the form of a name, especially one like Submit or Obedience. But then I looked at my Will. The clear sturdy meaning of his name was a big part of its appeal, the reason my husband and I had chosen his name. We hoped our little man would have a strong and determined will, and he did.
Thankful. That’s what I was feeling as we said goodbye to our tour guide and headed back to the car through the garden. It was time to get home.
It would be hard to describe our lost day at dinner. Walking in a meadow by the Connecticut River. Happening on a quirky little museum paying tribute to a mother of twelve who took in boarders to pay the rent. Finding the will to get in the car in the first place. After all, there was still laundry and dinner and errands to run.
But as we wound our way back through the now familiar country roads, I could feel summer. And it was just the beginning. We had a whole season in front of us. To get lost. I could hardly wait to see what we might find.
Posted by Holly Howley at 4:24 PM