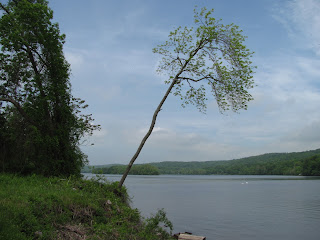 Part Two
The Edge of Summer
Determined but vulnerable in my convictions, the very next Friday, I made a second run for it. As my five year old Will and I left my oldest son’s elementary school after working at the school book fair, he asked, as he always does, “What now Momma, shops?”

The post office, the grocery store, the toy store, the drycleaner, the coffee shop, shop, shop, shop. Life is one big shopping expedition when you’re five and tag around with Mom all day.
“We’re actually going to get lost,” I said bluntly, immediately wishing I’d framed our plans in a more positive light.
“Lost?! Let’s go home,” he said, and for a second I was right there with him. Was it really worth getting into the hot car to drive who knows where?
But instead, we buckled ourselves in, and I turned on the radio.  I sang loudly hoping that the spirit of fun and spontaneity would settle in. Looking like a little sweat angel in his gym shorts and Red Sox t-shirt, Will was fast asleep in minutes.  We were on our way.
Route 17 to Route 2 to 91 south, it wasn’t until I reached Route 9 that I had a decision to make.  Where was I heading?  “When in doubt, head toward the water,” I thought and so I did.
There are several towns along Route 9 that I have gotten to know pretty well over the last seven years of living in Connecticut. But I wanted to find somewhere new. I decided on Exit 7, Haddam. Off the exit I went north on Route 154 and kept driving.
It’s hard to know exactly what you’re looking for when the goal is to get lost.  But about ten minutes into windy country roads a sign for Haddam Meadows State Park caught my eye.
The path into the park was barely paved and at first I thought we were the only ones there.  It was after all mid-day on a Friday.  But as I made my way around a grassy loop, I quickly came upon three school buses and scores of middle school aged kids having lunch.  I drove past the buses until I saw a picturesque spot overlooking the Connecticut River with two picnic tables.  I pulled in, shut off the car and rolled down the windows.  Will was sleeping so peacefully it didn’t seem fair to wake him up.  But within minutes he was stirring.
“Are we lost, Momma?” he asked as though lost was a destination.
“Yes” I answered “We’re in Haddam by the Connecticut River. Want to go for a walk?”
He unbuckled, not saying a word and followed me toward the bank and sat down on one of the table benches.  “It’s pretty here,” he said. I thought about how lucky I was to be on this silly adventure with my five year old, who despite his initial reluctance, now seemed up for the ride.
Not far from the table where we sat, there was a trail opening.  I paused for a second.  I am not always at ease in nature.  And I have never really understood why, especially since I grew up in Upstate NY, surrounded by lakes and trees.
“Why don’t we check out some of the wildflowers on that trail,” I said, camera in hand.  Will followed and almost immediately said “Look at those, I’ll take a picture of them.” He crouched down squinting in his photographer pose and snapped a picture of sprawling goldenrod clumps. We both admired the picture, as he grinned from ear to ear. 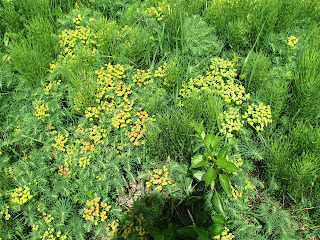 We continued walking. It was nothing short of glorious, my little adventurer and me, on the bank of the Connecticut River.
On the edge of summer.
Posted by Holly Howley at 9:28 AM