To Weed or Not to Weed? That's the editing question. 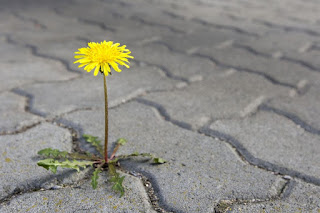 Five years ago I was doing a lot of walking with our newest family member. Round and round Daisy and I would go; endless traipsing to drain new puppy energies. I felt like a first time explorer in my own neighborhood, noticing details that I hadn't picked up on before.

Details are matches for the creative mind, sparks to narratives that create a life of their own. Details are different than facts, often quite the opposite actually.

Take the young couple who at the time had just moved to our street and were attacking their formerly neglected homestead with a vigor that made me tired just watching. From the grace of his wave and her razor sharp stride (not to mention impeccable taste in wreaths), I assigned him to pharmaceutical sales and she marketing. She was this close to a big promotion and they wanted kids but were unsure of the timing. Best to get the house in shape immediately, just in case.

Farther around the block was a single level yellow home inhabited by an elderly woman who’d managed an office at one of the large insurance companies in town. Despite her passion for work, her true love had been her children and husband. But, all had left her, through life’s natural stages of attrition. Now, so much energy went into her tedious day-to-day routines that she was unable to make it to the edge of her backyard where a pesky weed was flourishing, ravaging her carefully appointed row of shrubs.

She would thank, maybe even bake, for a passerby who would just yank that thing. That’s the narrative I’d created as I made my way on to her property. That’s right, I was two steps in with my cute puppy in tow, when reality called.

“What are you doing? That is not your weed!”

I backed away as only a semi-sane person would do and hurried us on our way, hoping that whoever did occupy the dwelling was out or at least not looking out the window.

I took another route the next day and the day after that. After all, that weed would still be calling my name.

I’ve long had a precarious relationship with weeds. In the garden, I’ve learned to eliminate the almighty weed early in the season. Through much trial and error, however, I now know that it’s best to work around most weeds from the mid-season point on. Neatness can quickly become the enemy of the harvest.

But, the weeds I detest most are the non-literal writing kind.

I am a lover of origination. The free flow of getting words down on the page. The internal magic that leaks out as ideas and characters are forming is complete bliss to me.

My “writers block” comes after the first draft is done. Choosing what gets to stay and what has to go is agony. I can spend hours twisting myself into knots over the simplest of phrases. Deciding one minute I’ve struck profound, then the next complete drivel.

Which leads me to a recent coffee walk with two very good friends. We were mid-banter, solving our worlds’ problems when we passed the house, the one level where I’d considered trespassing years before. 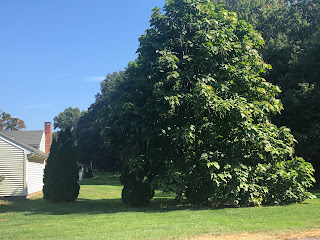 “Look at that!” I chirped, temporarily halting motion. “Do you see that tree? That was once a weed. A weed that I watched grow for weeks and weeks and almost pulled but I didn’t and now it’s a tree!”

Luckily my friends know me well and are not phased by my variety of crazy.

The shrubs that were once the yard’s center of attention are now dwarfed by the tree. It’s up for debate if the shrubs and the tree co-exist in visual harmony. What’s not up for debate is if I’d yanked that weed all those years ago, there would be no tree.

Which is exactly what I’ve learned about editing over these last few years. Sentences become stories that become manuscripts that with luck (and editing) become books when we give protruding thoughts that don’t belong room to breath.

Like mid-season pruning, editing necessitates a deeper understanding of process, a healthy respect for weeds.

It will always be more comfortable to yank those suckers before they make a mockery of what would otherwise be neat. But then we’d miss out on the trees.