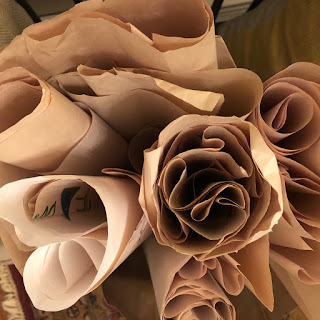 It happens every year. The must sort this and toss that bug. A drive to lighten the load and let excess stuff go. This year it happened early, timed perfectly with the start of a new year.

I tackled the unruly kitchen cupboards first. Why are the serving bowls in with the Tupperware? Making things make sense felt good. The hall room closets came next. Coats that no longer fit. Doo dads that went with other doo dads that weren’t around anymore. Mittens and gloves and…
Rolls and rolls of manila paper. Portraits made for me by Will in preschool. Fifty-seven portraits, to be exact. Taking up space, quite a bit of space, in the back of the closet.

As John departed for kindergarten, Will filled-in his big brother’s shoes at preschool. Will had the same teachers, same classroom, same, same, same, so I figured his experience would be the same. Not so much.

First day, at pick up, his teacher pulled me off to the side. “Will didn't want to do the class craft but he drew a portrait of you instead.” She smiled non-judgmentally in true wonder teacher mode. (Love you, Mrs. Letizia!) 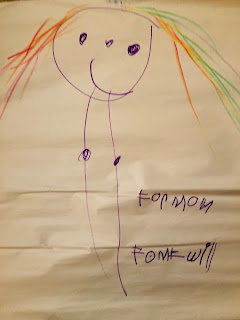 “Wow, look at me!” I said, as she handed me the stick figure drawing. Will was already half way out the door. He didn’t really care what I thought of his drawing; it was time to go.

“No one looked like us in the magazines,” he said.
Aaahhh. Will came out of the womb a fact based guy. When he didn’t see literal cutouts of us in the magazines they’d been given to recreate a family portrait, he drew the real thing to match the reality in his head.

Rule follower and people pleaser don’t always go together, even at three.

Weeks rolled around and each day he’d come out with the same picture. He’d shove the grayish white paper in my direction, like he was presenting a hall pass to a monitor.

The portraits kept coming for most of that first year. I started tucking them in the closet in disbelief at how quickly they were accumulating. I frequently boasted to Rob that the portraits were always of me. It was hard to mistake the two dots in the center of every drawing. I was the only one in our house sporting those.

A few years after preschool, I unearthed the old artwork and showed them to Will. I pointed to the round dots. “Those always made me giggle.”

I laughed, assuming he was embarrassed.

“There was this episode of Sesame Street where Elmo explained which body parts were important and at the end he said, “Don’t forget the knees! Without those your whole body will fall apart.” I didn’t want you to fall apart so I always drew the knees.”

Knees? Knees! Leave it to him to not only remember the episode but what Elmo said.

This year, mid-sort, I showed the haul to a now eighth grade Will, reviving the first day story (which he had already heard a few times). I pointed to the dots and before I could get the next word out, he reaffirmed, “Knees!” Then, recited Elmo’s words with classic certainty.

“So you didn’t want your old mom to fall apart?”

“Everyone falls apart without their knees.” He smiled. “According to Elmo.”

You can probably guess where the portraits are now, post cleaning binge. Yup, right where they were a year ago and where they’ll be a year from now: in the back of the closet taking up as much space as they need.

I considered saving just one or two, since they are all very much the same. But on the edge of high school and college, and whatever comes next…

I am going to need every last one of those knees. 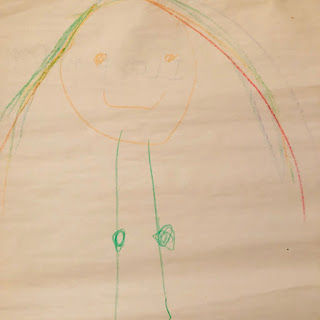