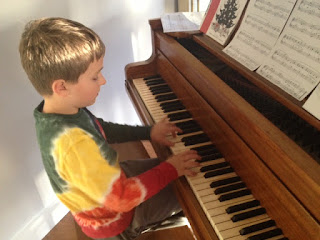 Practice may make perfect BUT the process is anything but.

My youngest has been taking piano lessons for six months. He took right to it. Mostly he loves mastering things...anything. Give him a challenge and he’s ready. He also comes from a long line of musicians. Scores of ancestors run through his veins. It’s eery and fun.

I never have to remind him to practice, because he “practices” all the time. Piano is his space filler. Like after he’s been told he can’t play anymore video games and dinner is still ten minutes away. Or, when the whole house is running around in the morning filling backpacks and lunch pails, he sneaks off to play the piano. It’s hard to yell at a kid who’s playing the piano. Even if his bed’s not made.

But make no mistake, listening to him practice is a perfectionist’s hell. He runs through the songs at warp speed. Testing himself to see how fast he can play something. Or, he plays songs that he learned months ago instead of the ones on this week’s “to-do” list. I am quite sure if there is a book about how to help your kids practice (and let’s face it there must be!) he/we are breaking every rule. When it comes to practice my little guy does exactly what he wants to do.

A few weeks ago I sheepishly asked his piano teacher for tips. I put it all on the line, my parental laziness that is, and admitted, “I don’t really keep track of what he is practicing. But he plays a lot.” To my amazement (and relief) her response was simple: “Don’t change anything. Whatever he’s doing is working.” 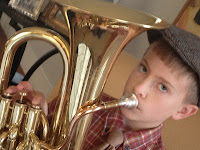 My oldest is a different story. He is, to put it plainly, a lot like me.  Creativity soars through him in waves, all day, every day, exhausting everyone in his presence. He is “working” on a new idea at any given moment, on any given day. Sitting still, doing nothing, is not in his DNA. Every moment has a purpose. But practice is painful. Too linear. Too stifling. Where is this going? What is this for?

In an attempt to help him learn about the power of practice (and make the hefty monthly rental fee worth it) I’ve instituted a “you must practice your baritone for fifteen minutes a day” rule. He reels, he objects, he erects an almost daily soap box about how unfair I am, how I have no idea, and on and on and on...

Until he finally, practices. The first round he plays in regimented tone. A sort of “take this” to any nearby listeners. Then about five minutes in, he’s making up his own song. Off happily in his own private ba ba ba bum land, creating music or something like it. Twenty minutes later he usually announces that he’s going to do a little extra practice time, to impress his band teacher. The push, the pull, the torment is over. Until tomorrow.

And then it’s my turn. To sit at my computer. At the coffee shop I call home. Willing myself to tap tap tap at warp speed, to keep the thoughts moving, to get it down. To trust that twenty minutes here, thirty minutes there will get me where I want to go. But where am I going? What is this all for?

Mahatma Gandhi said, “An ounce of practice is worth more than tons of preaching.”

And so I practice what I preach. Willing my own butt in the chair day after day. Finding the courage to spend time on what matters, to me, in the hope of reaching something close to perfection, or more importantly, happiness.