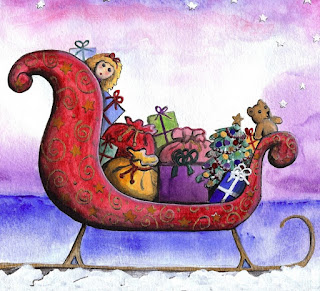 I’m mentally preoccupied with dinner. The boys are discussing a download...a video game, I think? The guy on the radio is daring to dangle off the impending fiscal cliff.

“Mom, I have a problem.” Will’s words cut like crystal through a sea of extraneous chatter. I turn the radio off. This sounds serious.

I am ready for “So and so says there’s no Santa,” or “Mom is there a Santa?”
But: I don’t believe in Santa. It’s clear he’s mulled the facts and arrived at an outcome.

Lucky, for me, John the older brother chimes in.

“What do you mean? Of course there’s a Santa!” he says.

“Really John?” Will replies. “A guy flies around in a sleigh with reindeer and drops presents into chimneys? And he makes it to every kids’ house in the entire world in one night?!”

“I don’t believe in that part either. I think it’s a real guy who flies around in a plane and there’s a system for shooting packages down the chimneys,” John says.

He is backing off from his firm resolve but resolute nonetheless.

“You think someone applies for the job of Santa?” asks Will.

“Yes, the guy who gets the job has skills,” says John. He says the word skills like he’s talking about a basketball game.

“Who would want that job?” Will asks.

Um...that would be your brother, I want to say. But, John beats me to it.

“Will, you’re just going to have to deal with it, there is magic in the world!”

It’s clear we are, once again, dangling off our own magic cliff. The gig’s just about up. I think John already knows. I also think he’ll make an excellent Santa someday. And Will, well, he'll eventually be satisfied to have his hunch verified. He’s a realism kind of guy.
Still it can’t hurt to keep it going for just a little longer. Until I’m sure they have the skills...to find the real magic.