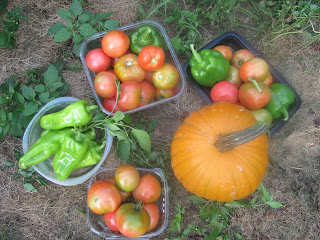 Tending the Weeds
This morning I headed out into my weedy, unattended, “why aren’t the peppers growing?” garden. In past years I’ve been regimented about weeding, but not this year. I could give you my laundry list of excuses but suffice to say, I’ve slacked off.
So this morning I set out to right the ship. Where to start?
I look to my precious tomatoes. Then to my single row of corn (a nostalgic nod to my Upstate NY roots). But the mirky tangled abyss otherwise known as the back of the garden is calling my name.
For some reason only one of the watermelon plants took root, leaving a vast space with nothing but weeds sprouting little yellow flowers as far as the eye can see. I begin pulling, then pull some more. It feels good to clear it all out, get rid of the clutter. With each heave ho, I am ridding my world of weeds.
“Mommmm! It’s ten,” Will calls out from the porch slider.
“Okay, thanks,” I say.
I’d asked my seven year old to let me know when the clock struck ten so that I’d have time to shower before we needed to pick his big brother up from camp.
How was it possible that I’d already been out in the garden for over an hour?
I again look to the tomatoes, corn, eggplants, cucumbers and marathon squash. I’d never gotten to them, my budding harvest. They were still a weedy tangled mess.
I’d spent my time on the back of the garden. True it was the area that needed the most work. But no matter how much effort I gave it, there would be no harvest. Neat doesn’t grow produce.
I spent a few lingering minutes on the languishing peppers and the climbing cucumbers. But with my shower now in question, I packed up and headed inside.
This afternoon, after the weeding, camp pick up, pool time, and a trip to the grocery store, I sat down at my computer. To write.
Where to start? Manuscript revisions I’ve been mulling for some time? The quirky essay rattling around in my brain? Chapter 4 of the middle grade I am determined to finish?
I should check my e-mails. I suddenly have a nagging feeling I am neglecting something, someone. I click on my inbox. A wave of multiplying new messages flood in. How did I let my e-mail get so out of control? I immediately start sorting the junk from the substance.
Then it hits me. The now neatly tended rows in the back of the garden, perfectly poised to...grow more weeds. I’ve been here before. I close my e-mail and return to the harvest.
An essay about weeding my garden.
Posted by Holly Howley at 6:14 PM