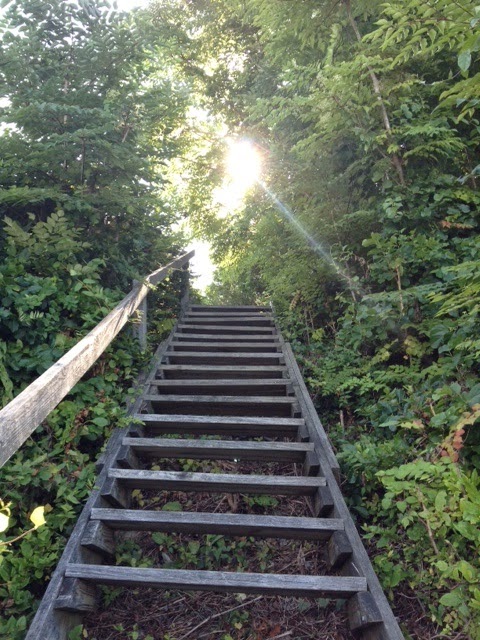 Many moons (and jobs) ago, a friend and I had a saying: “The mums are out.” It was a simple but clear message, summer was almost over.

These days another routine event symbolizes a shift in our collective family season. The start of the school year.

As that imminent date approaches, Rob and I have learned that taking a vacation, toward the end of August, affords us the ability to hang on, a little longer. Stiff cool breezes and the occasional “not quite a beach day” accompany us but it’s worth it...to pretend we have the power, to make summer stay.

This year we headed to Little Compton, RI to a house perched high on a hill overlooking a semi-private beach. It was the ideal location to savor summer.

On day one as the boys took their first of many early-evening dips, I challenged them, “You swim along the shore, while I walk to the lighthouse.”

I pointed toward the tall structure in the distance. The picturesque dome glistened in the almost setting sun.

I walked, they swam. But before long, Will was practicing one of his swim team strokes as John dutifully tried to catch up with me.

“It’s okay, just swim, we’ll get there tomorrow!” I yelled from shore.

The next morning, with Daisy in-tow and coffee in-hand, I began my early morning stroll. The beach looked different than the evening before, the sand was no longer visible. Our stride was somewhat labored by shifting rocks and shells. Daisy stopped frequently to sniff, her senses awash in seaside glory. We slowly made our way in the general direction of the lighthouse.

“John? What are you doing up so early?” It was a stupid question, John is always up early but somehow I’d thought: Maybe, just maybe, on vacation he’d sleep in.

“To the lighthouse?” he asked.

“To the lighthouse,” I confirmed.

We talked as we walked. About his upcoming ascent into middle school and my latest manuscript. (John is an excellent sounding board.) But as we approached the final leg, conversation stopped. There was a now obvious obstacle in our way. A rapid current pumping a semi-shallow pool of water into a nearby outlet.

“We’ve got this,” said John, still in his pajama pants.

“Um,” I pointed to the pants. He rolled them up.

We plunged in and before long were knee deep. But Daisy was having none of it. She plunked herself down, in the middle of the water, her nose barely visible, in protest.

“I think we better try this later,” I said. We turned around.

The next day we ventured off-site on a sandy beach adventure. The day after that it rained, a welcome break from sun and surf. And, the day after that family joined us. It was a full, fun vacation.

On the final morning, as I packed the contents of the cupboard and analyzed the leftovers in the fridge, I realized: We never made it to the lighthouse.

The clock read 6:37 am and John was, for once, still asleep. I tip-toed into his bedroom. 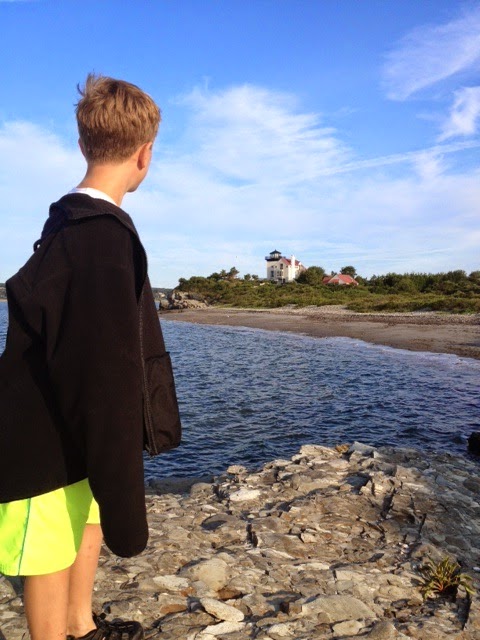 “Want to go to the lighthouse?”

Five minutes later we both quietly crept down the rickety steps to the beach. The tide was, for the first time all week, on our side. The shoreline was wide and sandy, clearing the way for easy passage.

“What was your favorite part of the vacation?” I asked.

The minutes flew by and too soon we approached “the lighthouse.” Which wasn’t actually a lighthouse at all. Our desired destination was, in reality, a massive house dangling off the ocean bluff, with a lighthouse-like turret. Probably the master wing of what looked to be a seven thousand square foot house. Just before the home’s perimeter, a mound of rocks stood as a barricade to casual passers-by. We climbed the rock pile and gaped at the mansion beyond. No longer craving to go any further.

And it was. Time. To pack away the beach toys, wipe off the sand. Time. To pick the tomatoes, buy the mums.