Snow Stories from Winters Past 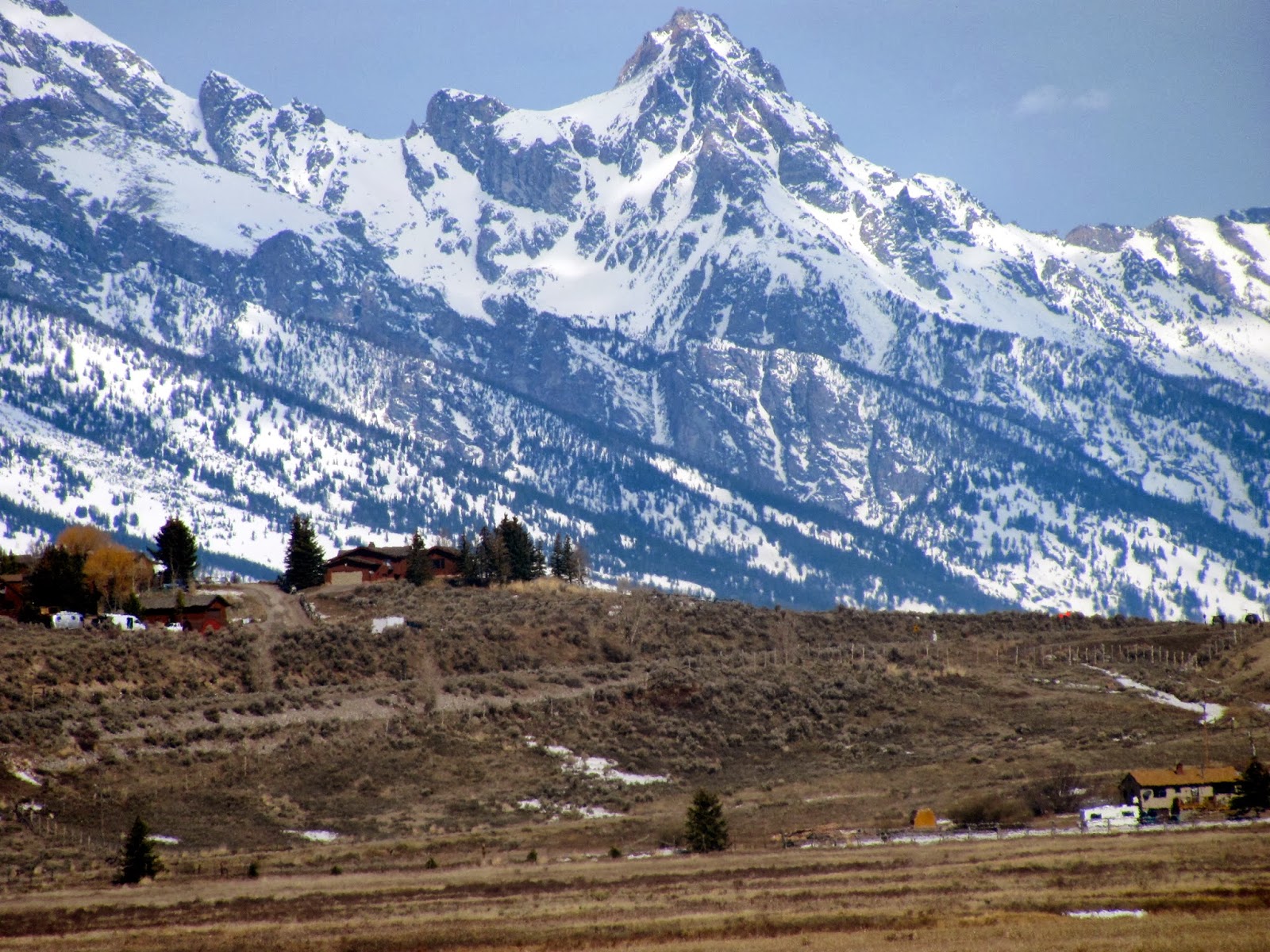 My brother and sister-in-law have lived in Jackson, Wyoming for twelve years. After retiring a few years ago, my dad and stepmom bought a snowbird retreat near them in Victor, Idaho.

We talked for years about making the trip. Since my father is only out there in the winter months, it seemed fitting the excursion would involve skiing, something both my husband and I grew up doing but had barely exposed our boys to yet. By the time we arrived in Jackson, Wyoming John and Will had skied a total of six times.

I was vaguely aware that skiing “out West” was different than the serene hills of the Berkshires or family ski mountains in Connecticut. “Less chatter,” according to my father.
Day one of our ski vacation, I was encouraged by what I saw, opportunity for skiers of all abilities, not to mention unseasonably warm 70 degree weather. We were skiing amidst snow covered majestic mountains in sweaters.

Day two we signed the boys up for an all day lesson. They were in heaven as Yeti, their instructor, proclaimed them “Coyotes” the not beginner but not quite intermediate level and they were off. And so were we, to the “big mountain.”
However, as we began the climb up, up, up, 10,000 feet, I began to crave the softer slopes and the parental obligations of playing it safe with the boys.

The view was breathtaking, until the reality of “Hey, I have to get down from here!” hit. We soon realized that while the slopes were narrow the inclines were manageable. The first few runs we spent as much time taking pictures as we did skiing. It felt like we were in a scene from Mary Poppins, that somehow Dick Vandyke had painted an impromptu Ansel Adams, and there we were, embedded in the grandeur of the Great Teton Mountains.
After an enchanted couple of days skiing, we took a break to check out sites in the valley. We saw elk, moose, eagles, and bighorn sheep. We witnessed the national finals of a snowmobile competition where racers plunge UP the mountain. We rode a horse drawn sleigh to a yurt where dinner was prepared over open flame ovens.

On the last day of our visit, we decided to hit the slopes one more time. We needed one last fix and had promised John and Will a trip up the big mountain. They were confident and ready.

It was colder than it had been all week. But still not that cold. We’d heard a weather report, “Chance of rain in the valley and snow in the upper elevations.” I’d questioned whether to wear my thick jacket or go with a more modest covering, opting for the latter.

On our first trip up the big mountain with the boys, a wall of sleet began to move through. A wet mixture of rain and snow that hurt as it hit the face and neck. It had been such a mild week, I strained to remember if I’d even packed the neck warmers and extra layers in our ski bag that was safely stored in the lodge.

When we arrived at the bottom I could tell my husband thought we’d pushed our luck. Something was clearly moving in, the sky was now a slate grey. Still the boys were on a “we did it!” high and this was our last hurrah. “One more run?” I said out of ear shot of the others. 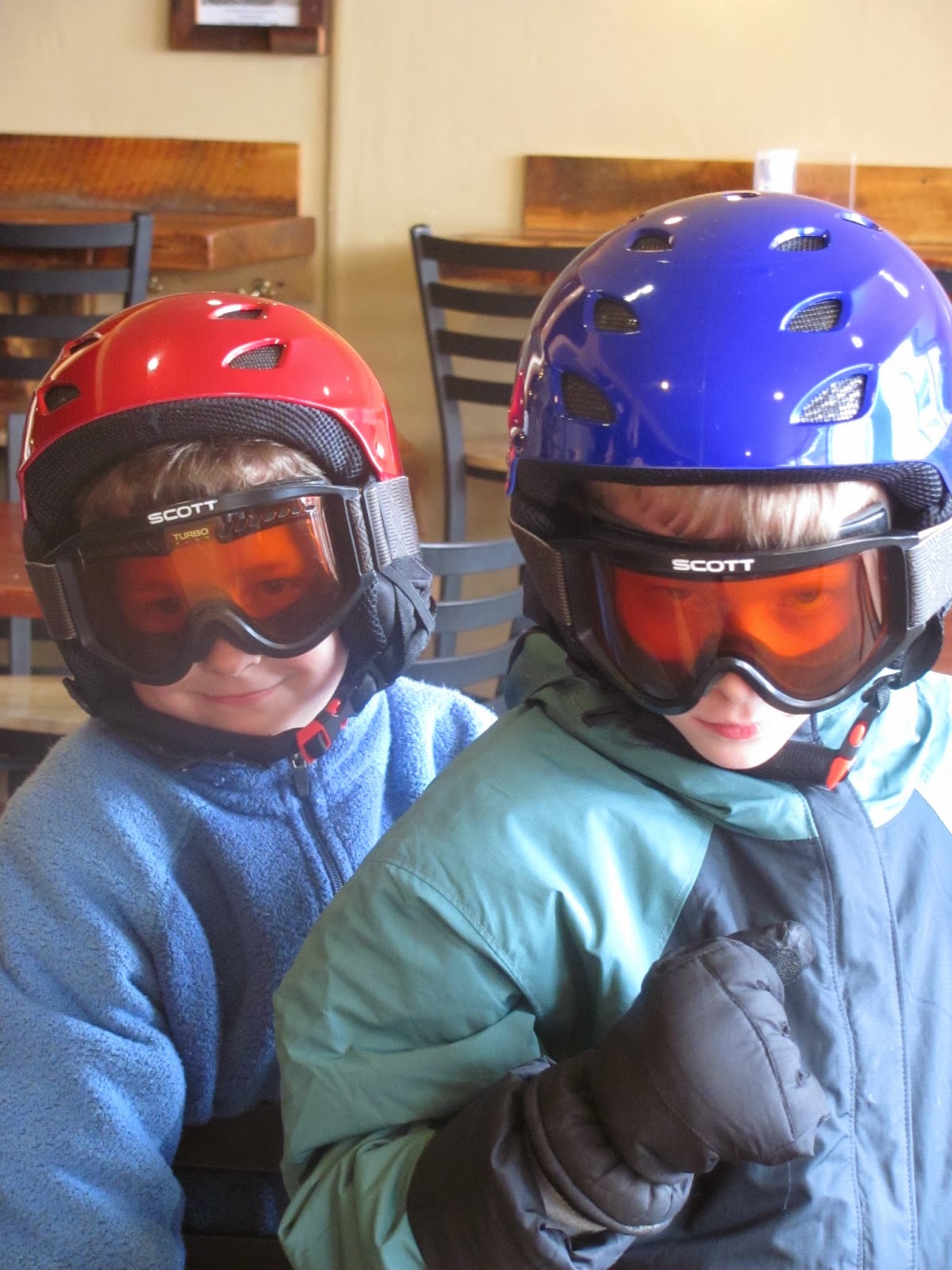 “I’m going in,” he said. We exchanged looks and I held a finger up to indicate I was planning to take one more run with the boys. “Be careful,” he said with that knowing familiar look, the one that said, “You’re crazy but I love you anyway.”

Meanwhile the boys had already joined their grandparents in the lift line. Contemplation was not part of their equation. We were off.

Halfway up the hill, to put it plainly, all hell broke loose. The chairs on the lift started swaying. I was riding with John, my oldest, who is cut from my cloth. Moxie in moments but hardly a daredevil. For some reason (fear mainly), I decided not to acknowledge the Armageddon that was erupting around us.

Three quarters of the way up, John said, “Mom the snow hurts.” I nodded. “We’re going to be okay,” I assured, “We’re on an adventure.”

As we approached the top of the mountain we were in a complete white out. “Get ready John,” I announced with seconds to spare. “Tips up!”

Soon Will, Dad and Cheri cut through the marshmallow sky. My father looked like an abominable Rip Van Winkle, snow stuck to his face and beard. All I could think to say as he approached was, “Holy shit.”

The kids were a few feet ahead with Cheri, which might as well have been a mile because I could barely see them. The wind was picking up and now the sleet had turned to snow, a wet, thick rapidly accumulating snow.

He shook his head. As if to say, Holly, Holly, this is no big deal. But instead, he said, “I’m going to take Will, Cheri will take John, you follow behind. We’ll be fine.”

I could see John in his blue helmet starting to panic. Suddenly I saw the wisdom of my father’s assignments. Cheri is calm in difficult moments. My father is all coach, the tobacco chewing, “What’s the problem?!” type.

I could see Cheri assuring John that he was okay, instructing him on where to turn as she used her pole to mark the edge of the trail. Will, on the other hand, was forging ahead “bull in a China shop” style, my father close behind.

Soon John and Cheri were out of site. I had to trust they were okay as I stuck close to Will who was either oblivious or ignoring the blizzard that surrounded him. He was bombing down the hill one stretch at a time, with his glowing red helmet and goggles lighting the way. We’d taken to calling him the Red Baron because of his helmet, and in this moment, the name fit. 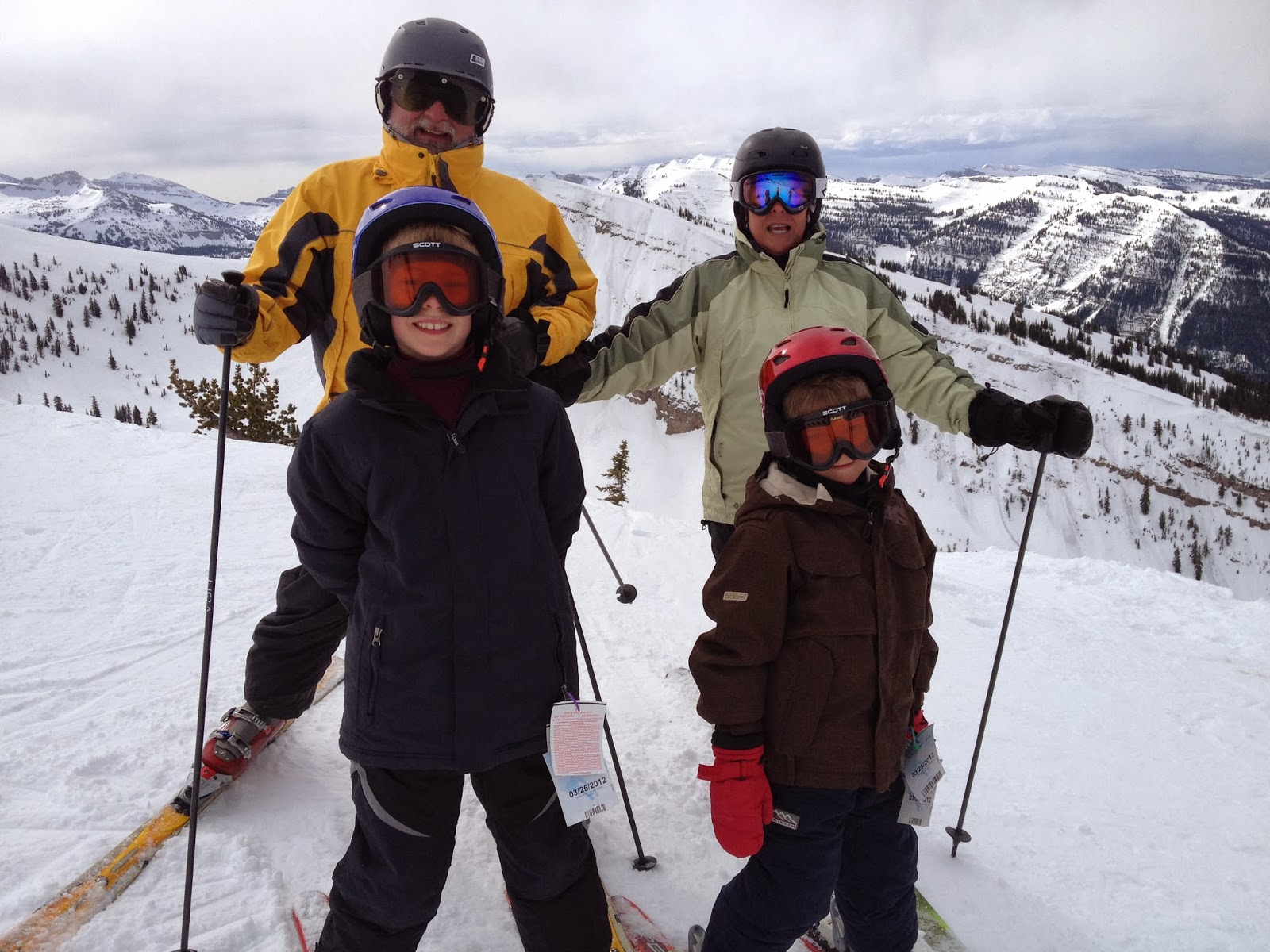 We reached the wide part of the trail and I held my breath because I knew what was coming next. A more narrow stretch where snowboarders shot in and out from the trees. On the first run we’d found a family friend clobbered by a snowboarder who clipped her skis in this daunting stretch. She, like Rob, had the common sense to sit this run out.

Just as we were about to enter the section I was dreading, as if anticipating my apprehension, Will took a nose dive. Falling is, of course, part of skiing but somehow the boys had avoided any major tumbles the entire week. Now in the middle of snow gusts, Will was lying horizontal.

My father was ahead of us down the hill and stopped, straining to see if things were okay. When I reached Will, he was mad and beginning to tear up. “I didn’t fall,” he said insistently. Something had “made him” fall.

That’s my Will, most kids would have been wailing in fear. Not Will. He just wanted it known that the tumble was not his doing. What can I say, he is aptly named.

“Will, let’s get your skis back on and go meet Grandpa,” I said, attempting confidence.

We struggled for a minute, maybe two and were greeted by my dad who had climbed up hill to help. I took a deep breath, relieved he was handling things.

As I looked around, I realized we were the only people on the hill. How was that possible? Where were all the skiers and snowboarders, not to mention ski patrol? Had everyone made a collective decision to sit this one out except for me, the mother of two “Coyotes?”

Soon we were up and running. When we hit the narrow trail there were no annoying snowboarders to be found, only Cheri and John hovering under a tree waiting for us. 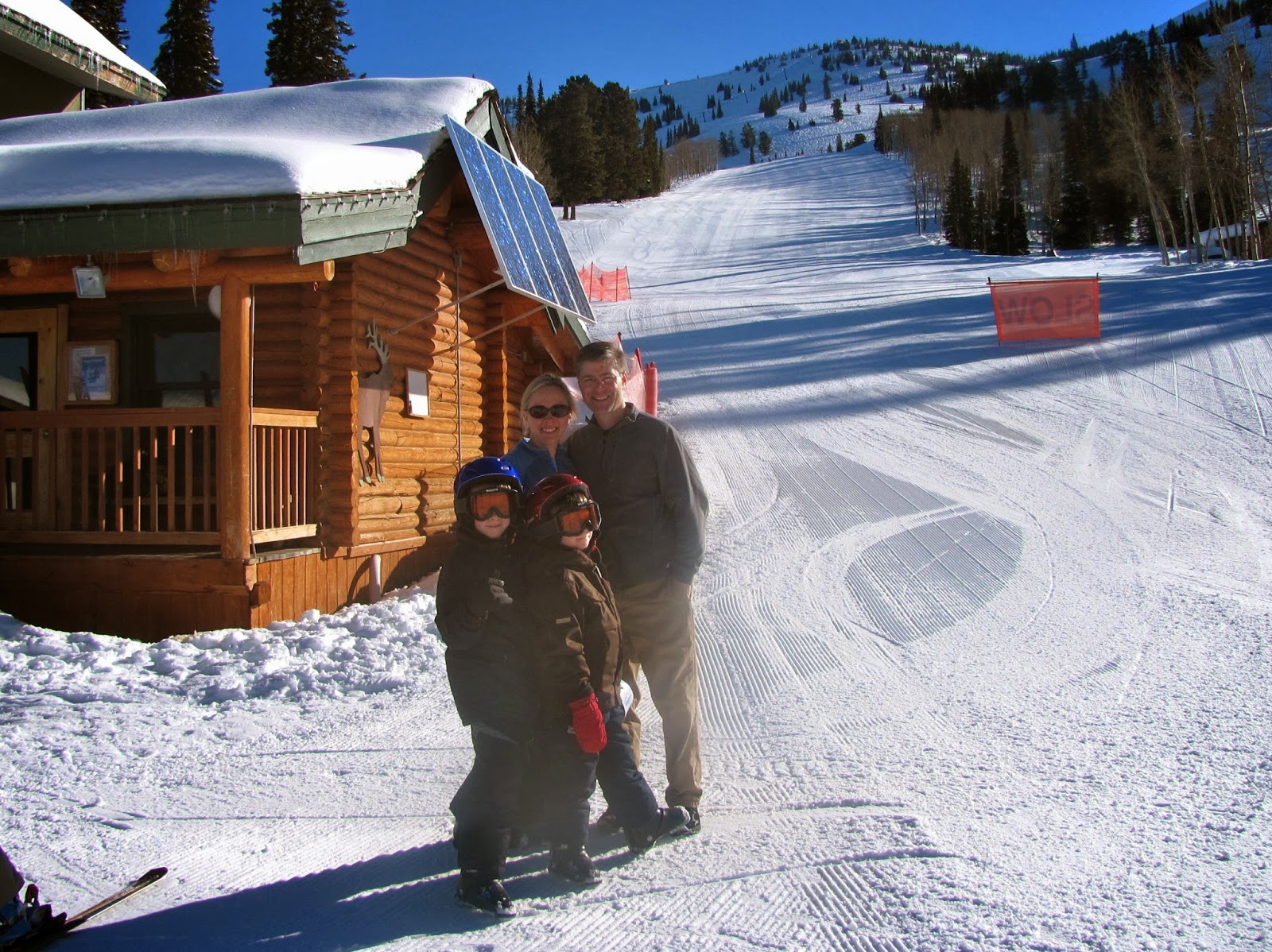 We joined forces and continued, even slower than before, down the remaining connector trails. Many many minutes later the lodge was in sight. As we approached, I could see Rob standing outside, in the driving snow, staring up the hill.

I could also see the ski lift, motionless. So that was the reason no one was on the hill. They’d closed the lift. Turns out in addition to rapidly accumulating snow and sleet, lightning had joined the mix making it unsafe to be on the mountain.

“How was it?” Rob asked helping us to eject from our skis and poles and helmets.

“An adventure,” I said shaking my head.

The boys filled in the rest.