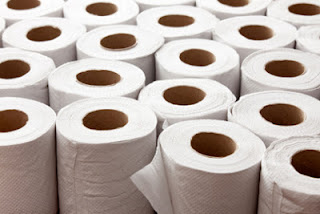 Every few months it happens. Our household is clicking along until...something seems strange. And then we, my husband and I, go into financial forensic mode.

“Wow,” was all I could say, when he presented me with the total. Of what we’d (I’d) been spending on groceries. Of course I know what the big shop costs each week, because I’m doing it. But what I hadn’t realized was how much the “incidentals” were adding up.

Lately I’ve been feeling like I can’t keep groceries in the house. Which is scary because there are only four of us and our kids are 8 and 10. What’s going to happen when they’re 14 and 16?

“I guess I have to try something new,” I said.

“Or maybe we have to plan to spend a lot on groceries,” my husband said. He’s always a good sport. But then again he NEVER eats leftovers.

“I think I’m spending too much on paper products and snacks,” I said. He had no response because I am pretty sure he has no idea what a roll of paper towels or box of granola bars costs. 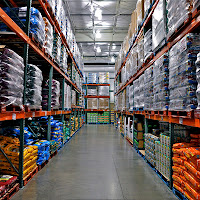 “I’m going to do something that I’ve been avoiding for quite a while,” I said, in dramatic tone. “I’m going to BJs.”

Later that week, after spending Saturday morning shuffling my two eating-me-out of-house-and-home offspring from lesson to class, class to lesson, I announced, “Boys we're going on an adventure!”

“What is this place?” asked John as soon as we entered. “It’s like Home Depot but it smells like burnt pizza.”

I tried not to laugh. I needed to remain focused. The last, and only other time I’d been to BJs, I’d left with a seven foot pre-lit Christmas tree that didn’t work out so well.

“We’re here and I need your math skills. This store sells things in bulk so we’re going to buy items we usually buy at Stop & Shop, but more of them and it’s going to save us money,” I said, feeling like the Suze Orman of motherhood.

It was a natural question, since we were surrounded by big screen TVs and computers.

“And jewelry,” Will said, pointing to the jewelry counter near the front door.

“Yes, I think the food is in the back,” This time I marched past the electronics and seasonal items and clothes, and finally saw a massive aisle of brightly colored bottles: detergent.

I searched the long aisle, unable to find my preferred kind. My usual brand was there en masse but our particular kind was not. I settled on another brand, one that had the “sensitive skin” formula and not so effortlessly lifted it into the massive cart, where it rattled around like a bottle of orange juice.

“Okay boys, between these two brands, which is cheaper?” I asked, determined to instill some financial literacy.

They stared at me blankly. “Where are the prices?” Will finally asked.

Good question, I searched the colossal shelves, finally finding the price placard above each.

“In school we learned that it’s not just about what’s cheaper but you have to know about the quality too,” said Will.

Seriously? I mean of course, I agree, when it comes to meat or eggs or berries, but paper towels?

“Which is a better brand?” he asked, pressing the concept.

“No idea, they're probably about the same,” I said.

“Then there’s no right answer,” he said.

He had a point. They had the exact same number of paper towels in each package. And there was less than a dollar price difference.

We made our way through the aisles, until we officially arrived at the grocery section. It was, in short, overwhelming. It didn’t help that I’d chosen Saturday mid-day for our maiden voyage. This was clearly not a novice time slot. Purposeful people who either had 14 children, owned a restaurant or didn’t plan to be back for a really long time were wheeling their mega carts with precision.

Will quickly spotted our favorite brand of mushroom ravioli. The last time we’d eaten it for dinner the boys fiercely fought over the last one.

There was clearly no discussion needed. I nodded and he placed the gargantuan package of pasta and cheese in the cart. I was pretty sure by the time they finished the package, they would never want to look at mushroom ravioli again.

By the time we reached the freezer section, I was hitting my stride. The look on John and Will’s face was priceless when I reached into the freezer and plopped a 5 pound bag of frozen broccoli in the cart.

“Are we going to have broccoli for breakfast?” John asked.

But the epiphany came when we reached the yogurt. “Aaaah,” I said finding the mother load, literally. Our brand of yogurt in a twelve back for $13. I was used to paying $1.50 each. This was amazing.

A long hour and a half later, we were done. As done as you could be in a store with enough of everything to last a lifetime or more.

As we waited in line for the “checker” to look at our receipt and items, we were once again surrounded by big screen TVs and jewelry.

“Would you have married Dad if he bought your engagement ring at BJs?” John asked.

I don’t think John intended the question to be funny. But I was laughing so hard I couldn’t catch my breath.

Thankfully it was Will who finally found his right answer:

“At least the ring would be big, really big.”
Posted by Holly Howley at 5:17 AM