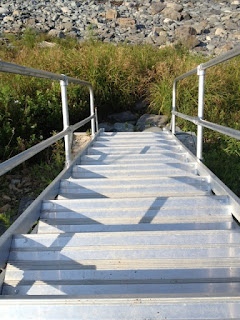 The house is still, strangely quiet. I am writing.

Rob sits in “his room” otherwise known as the living room, reading.

Me writing, him reading, this is not unusual.

But on this day, no one is asking: “Mom can I play the Wii?” “Dad what’s for breakfast?” “Have you called Parker’s Mom?” “What are we doing today?”

Instead I ask the question: “Want an egg?”

When did I miss that? Surely the crunching should have pierced the deafening silence.

Our boys are with their grandparents this week. Off on adventures of an amusement park, historic site, summer nature.

And we are home, living life. Going to work, eating, reading, sleeping, watching TV. In the past when we’ve had the odd occasion of being kidless for a series of days Rob and I would quickly schedule our own adventures.

But this year is different. We just took our family vacation. I’ve just started a new job. And we are years into sleeping through the night, no longer in the “hunker down” stage where babies and toddlers muck up the ability to eat, sleep and shower.

We are in the middle. Of a week without kids. Of our lives.

I could tell you that I am lost without them. That I have no idea what to do with myself. That my husband and I are strangers rattling around in a house too big for two. And that would be sort-of true.

BUT this week when I clear the coffee table of the usual scraps of paper, abandoned drinks and day old newspapers, the next morning it’s still clutter-free. Wow.

Three days after going to the grocery store there is still food to eat and some of my favorite lemonade left. Cool.

And come to find out my husband and I still enjoy talking, to each other. Amazing.

It is all very wow, cool and amazing until I think about the fact that this is it. The future.

Someday, with any luck, our kids will make it through higher education and find gainful employment. And this is what’s waiting for us.

A clutter-free, silent, refrigerator filled house, together. With plenty of time to read and write and eat cereal. Weird.

Sure this is many years off. Our kids are only 7 and 9. But this moment is strangely familiar and becoming more frequent. The realization that nothing stays the same, ever.

I had a similar moment the day before my youngest started kindergarten. It was a Monday. What was supposed to be prep-day. Rationally, I knew not all that much would change. Will had attended half-day pre-school, now he would attend half-day kindergarten. But emotionally, I could feel it. A shift was underway.

So, with lunches to pack, back packs to ready I announced: “Let’s go to the beach!”

When we got to the beach, forty miles away, the kids ran on to the sand, leaving me to carry all the paraphernalia. I was feeling and looking a tad ridiculous. Not only was it the day before school but it wasn’t exactly a beach day. The sky was overcast, a chill hung in the air.

But to my surprise, as we approached the water, I was not alone. Four other moms I knew were there with their tribes too. There we all were. Holding on.

It is now two years later, and I am two short weeks away from having a 2nd and 4th grader. I’ve adjusted to the seven hours that used to be filled with Mommy Music classes and trips to the local library. They like their “new” life and I like mine too. Still, it’s different than it once was.

With any luck, someday I will adjust to this too. But I am decidedly not here yet.